“Endocrine disruptors are chemicals that may interfere with the body’s endocrine system and produce adverse developmental, reproductive, neurological, and immune effects in both humans and wildlife. A wide range of substances, both natural and man-made, are thought to cause endocrine disruption, including pharmaceuticals, dioxin and dioxin-like compounds, polychlorinated biphenyls, DDT and other pesticides, and plasticizers such as bisphenol A. Endocrine disruptors may be found in many everyday products– including plastic bottles, metal food cans, detergents, flame retardants, food, toys, cosmetics, and pesticides."
—National Institute of Environmental Health Sciences1 Endocrine Disruptors. July 15, 2016. Viewed July 28, 2016.

As demonstrated by the NIEHS statement, products used in our daily lives, chemicals circulating in our environment, and some occupational exposures can alter endocrine function. Endocrine disrupting chemicals (EDCs) can alter the hormonal signals that control and guide much of our growth and development, the way our organs function, and our ability to fight disease. 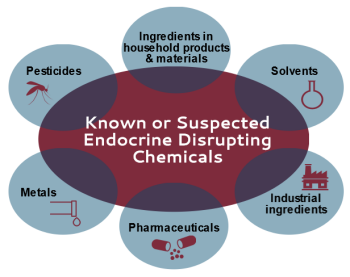 Some chemicals can act on the endocrine system to disturb the homeostatic mechanisms of the body or to initiate processes at abnormal times in the life cycle. The chemicals can exert their effects through a number of different mechanisms:

Endocrine disturbances in the human body result in breast cancer, testicular cancer, disruption of thyroid and ovary function, Alzheimer's disease, schizophrenia, nerve damage, and obesity.4 as well as lowered fertility, increased incidence of endometriosis, and other types of cancer. Exposures to endocrine disruptors during pregnancy and soon after birth may pose the greatest risk to long-term health.5

Some EDCs and Specific Health Outcomes

Research from The National Toxicology Program (NTP), a division of the Department of Health and Human Services, as well as other researchers and NIEHS have reported significant effects of endocrine disruptors.

Diethylstilbestrol (DES) is a synthetic estrogen created in 1938; from the 1940s through the 1970s it was added to livestock feed to enhance muscle growth7 and prescribed for the prevention of miscarriages. The medical community discontinued its use after a 1971 article in the New England Journal of Medicine reported an association between fetal exposure during the first trimester of pregnancy and a rare cancer (vaginal adenocarcinoma) that manifested decades later in adolescents and young women who were exposed in utero. These DES daughters experience higher rates several diseases and disorders highlighted in the list at right.8 DES sons have an increased risk for non-cancerous epididymal cysts (growths on the testicles).9 Although DES was discontinued as a prescribed medication in 1971, it was used as a feed additive in cattle until 1979.10

Other Examples of EDCs

These toxicants are discussed in more detail on their respective webpages on this site.

Disease and Economic Burden of EDCs

In 2015, an expert panel in the European Union came to consensus on the disease and economic burden resulting from EDC exposure. Using new methods, they were able to assess the probability of causation for EDC exposures and disease outcomes and then quantify the cost to society for the resulting disease burden. Expert panels achieved consensus at least for probable (>20%) EDC causation for IQ loss and intellectual disabilities, autism, ADHD, childhood and adult obesity, adult diabetes, male genital tract malformations, male infertility, and disorders associated with testosterone signaling. They estimated these disease endpoints cost the EU €157 billion, 1.23% of the gross domestic product, equivalent to $209 billion US dollars, annually.22

See more about EDCs and health in the list of CHE publications and Dig Deeper resources in the right sidebar.

This page's content was created by Lorelei Walker, PhD, and Nancy Hepp and last revised in August 2016. Content from Toxipedia is noted with the logo.