The global environment encompasses broad, worldwide environmental factors that are beyond the scope or control of any community or nation:

Based on a systems approach to health, these factors can overlap and interact in multiple ways with each other and with other major environments described on this site. Climate change, air quality, water quality and soil quality are each discussed on separate pages, while a brief overview of the remaining five topics and their impacts on health follows.

Natural disasters include earthquakes, extreme heat or cold, hurricanes, landslides and mudslides, lightning, tornadoes, tsunamis, volcanoes and wildfires.1 In 2015, the human death toll was 22,749 worldwide, with more than 102 million people affected by natural disasters. 2002 disasters impacted the greatest total numbers of humans since the start of the twentieth century: 658,053,168.2

Data from the Centre for Research on the Epidemiology of Disasters3

Data from the Centre for Research on the Epidemiology of Disasters4

Natural disasters can produce these health impacts, in addition to deaths:6

Global conflict accounted for tens of millions of deaths in the first half of the twentieth century, millions of deaths in the second half of the twentieth century, and more than a half million battle deaths in the first fifteen years of the twenty-first century. One in 10 violent deaths worldwide are from warfare. In 2015, 51 armed conflicts were recorded globally, with almost 100,000 battle deaths.9 In addition to deaths, mass conflict may involve other forms of violence, such as rape and other forms of sexual violence, torture, and forced displacement or labor (slavery).10 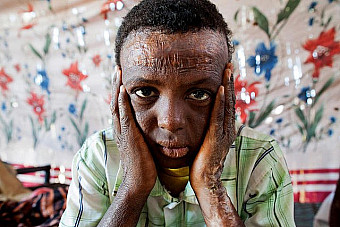 Ten-year-old Suleiman, from Dar Al Salam, North Darfur, suffered burns to more than 90 percent of his body when his brother detonated an unexploded device that he found near their house in November 2006. Image from United Nations Photo at Creative Commons.

People move from their place of birth for many reasons:13

Whether mass migrations of economic or conflict refugees or small migrations of individuals or families, migrations impact quality of life and health. The migration process may involve stressors that can impact migrants' health and well-being. Conditions affecting health in the country of origin and during the journey may include war, torture, loss of relatives, long stays in refugee camps (which may have poor sanitation and overcrowding), imprisonment and socioeconomic hardship. After arriving in the host country, migrants may experience imprisonment, prolonged asylum processes, language barriers, lack of knowledge about health services, loss of social status, discrimination and marginalization.14

Health impacts for refugees are similar to those above related to both natural disasters and mass conflict.

Human history holds many examples of widespread disease and death resulting from disease-causing microorganisms—bacteria, parasites, fungi and viruses. Infectious disease was the leading cause of death in the world until the twentieth century16 and still is in low-income countries. Lower respiratory infections, HIV/AIDS, diarrheal diseases, malaria and tuberculosis collectively account for almost one-third of all deaths in these countries.17 Tuberculosis (1.5 million deaths in 2014) and HIV/AIDS (1.2 million deaths in 2014) are the leading infectious disease killers worldwide.18

Interactions of Infectious Disease and Other Environmental Factors

Infectious disease deaths are highly correlated with poverty: The maps of those living on less than two dollars a day and the epidemiology of HIV/AIDS, malaria, tuberculosis, and many other infectious diseases coincide nearly exactly, although some notable exceptions are seen in Cuba and Kerala State, India.19 Nutrition is likewise closely linked with infectious disease, with causality working in both directions: one of the effects of micronutrient deficiencies is increased susceptibility to infection, while parasite infection can lead to malnutrition.20

Interactions between environmental exposures and infectious disease are being studied, such as how toxic chemicals that can undermine the body's immune response might make  individuals more susceptible to certain pathogens.21

Hazardous chemicals and infectious disease can also be related in another significant way. Pesticides, which can impact neurodevelopment and contribute to other health problems, are often used to kill mosquitoes and other vector insects to reduce the spread of infectious disease. To combat mosquitos carrying the Zika virus, whole communities in Brazil, the US and other places have been sprayed with pesticides, potentially increasing exposures among children and pregnant women.22

A further consequence of this pesticide spraying was the deaths of millions of honey bees from spraying in South Carolina.23 Honey bees are essential for pollinating crops and other plants, and thus are critical to human health. With concern about colony collapse disorder already widespread,24 alternatives to pesticide spraying to control infectious disease need to be implemented to protect human and ecological health.

Impacts of Maternal Infections on Fetal and Infant Health

Certain infections in pregnant women can damage the fetus or infant:25

The worldwide spread of a new disease is called a pandemic. By definition, a pandemic is “an epidemic occurring worldwide, or over a very wide area, crossing international boundaries and usually affecting a large number of people.”27

There are differences between a pandemic flu and a seasonal flu. The seasonal flu peaks annually in the beginning of the year. Healthy adults have a lower risk of flu-related health effects and may develop immunity from previous exposures, plus there is usually a vaccine available to provide further protection against the seasonal flu virus. A pandemic flu occurs just a few times a century, affecting even healthy people. When two different strains of a seasonal flu virus interact in the same cell within the body, they can combine and make a new strain of the flu, called antigenic shift. This new strain can spread and become a pandemic.31 Annual vaccination can help decrease the opportunity for two flu viruses to interact.

The Ebola virus disease (EVD) surfaced in 1976 and is characterized by an acute, serious illness of fever, fatigue, muscle pain, sore throat and headache, followed by vomiting, diarrhea and, in many cases, bleeding and death. This virus travels from wild animals to humans and then between humans. Typically, EVD has a 50 percent fatality rate overall, although early treatment improves outcomes.32 The most recent outbreak in West Africa, beginning in March 2014, is the largest and most complex Ebola outbreak to date. There have been more cases and deaths in this outbreak than all others combined. It has also spread between countries, both by land and by air travel.33

Smallpox, caused by the Variola virus, has infected humans for thousands of years. Subtype Variola major has a fatality rate of 30 percent. It presents as raised bumps on the face and body accompanied by fever, malaise and sometimes vomiting. A worldwide vaccination program has eradicated the disease, with the last US case reported in 1949 and the last known case in Somalia in 1977. The virus still causes concern for its potential use in bioterrorism.34

The plague, found globally, is an infectious disease caused by the Yersinia pestis bacteria that can infect humans and certain animals. Contact with bacteria-carrying fleas and direct contact with the body fluids and tissues of infected people can transmit the disease. Although there are three forms, the best known form is the bubonic plague, commonly called the Black Death from its killing of perhaps 50 million Europeans—60 percent of Europe's population at the time—in the fourteenth century.37 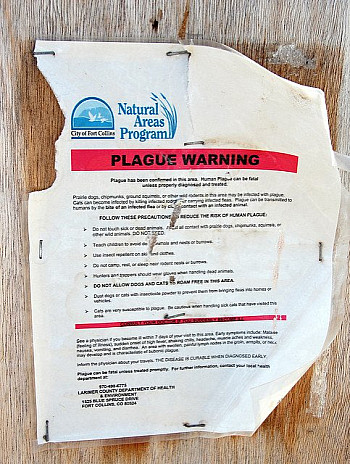 Plague warning in Colorado in 2009; image from Cassandra Turner at Creative Commons

A healthy natural environment invites walking, which is associated with many positive health outcomes, including a reduction of the impacts of diabetes, asthma, arthritis, cancer and musculoskeletal diseases. Regular walking may even prevent injuries.42 More information about the health effects of active transportation, and how those are influenced by the built environment, is listed on the Built Environment page.

Research shows a significant association between decreased outdoor activity time, increased time indoors and rising childhood obesity. Federal and state policies have compounded this problem of decreased outdoor time for children by making it harder for children to get outside during the school day, such as by pressuring schools to cancel or reduce recess to prepare for standardized tests.43

Policies that limit children's access to outdoor time seem misguided, for the effects of time in nature include improved cognitive functioning (including increased concentration, greater attention capacities, and higher academic performance), better motor coordination, reduced stress levels, increased social interaction with adults and other children, and improved social skills.44 Children do better in school when they can engage in natural environments. Simply seeing nature from the school room is associated with improved academic outcomes. Research has found that a natural learning environment fosters critical thinking and problem solving, reduces the symptoms of ADHD and increases focus and attention. Using the environment to teach has been shown to increase a child’s enthusiasm for learning, improve impulse control and reduce disruptive behaviors.45

Access to a healthy natural environment supports children in other ways. Children of mothers who experienced more nature have shown better fetal growth and healthier birth weights. Children who play in direct sunlight have lower rates of nearsightedness and increased vitamin D levels.46

Information about how access to healthy natural environments interacts with poverty and social factors is on the Cumulative Impacts page.

Practices such as deforestation, air and water pollution, soil degradation and landscape-scale mining and agriculture have become customary. Our use of Earth’s natural resources is not sustainable and is leading to a loss in biodiversity. We are said to be in the sixth mass extinction, one created by human activities. More than 30 percent of all species might be extinct by 2050.47

Nature is a key component of economies yet is often missing from economic accounting. In calculating costs for goods and services, we fail to include the value of natural processes critical to the production of those goods and services. Services provided by intact ecosystems include absorbing and storing rainfall, purifying water, modulating effects of storms and floods, fertilizing soil, cleaning air, producing oxygen, storing carbon, recycling wastes and more. Our economic systems—and human life—would soon collapse without these services, and they must be part of any "bottom line" assessments if those assessments are to be useful and durable. Production that disrupts or impedes natural services by introducing chemicals or radiation, by diverting water, or by overwhelming natral flows of materials or energy must include the costs of these actions to be accurate and sustainable.

The biodiversity of Earth’s species contributes to the discovery of new drugs and technologies that further support health, another factor to be included in accounting systems.49

This page's content was created by Lorelei Walker, PhD, and Nancy Hepp, and last revised in November 2016.