Lead is a metal found naturally in the earth's crust.1 In nature, it is found more often in chemical compounds than as a pure metal. Even minute exposures can have devastating and permanent effects on humans, which is most unfortunate considering how widely lead has been used throughout human history.

Because it is easy both to extract and to work with, lead has been used extensively since ancient times in everything from building materials and cosmetics to pots and pans and coloring agents for food. 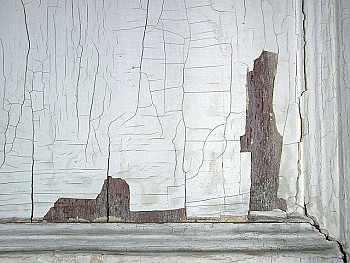 Lead was added to paint for decades; leaded paint is still  available for purchase in some countries; image from Bart Everson at Creative Commons.

Even at very low doses, lead toxicity can impact several systems in the human body:9 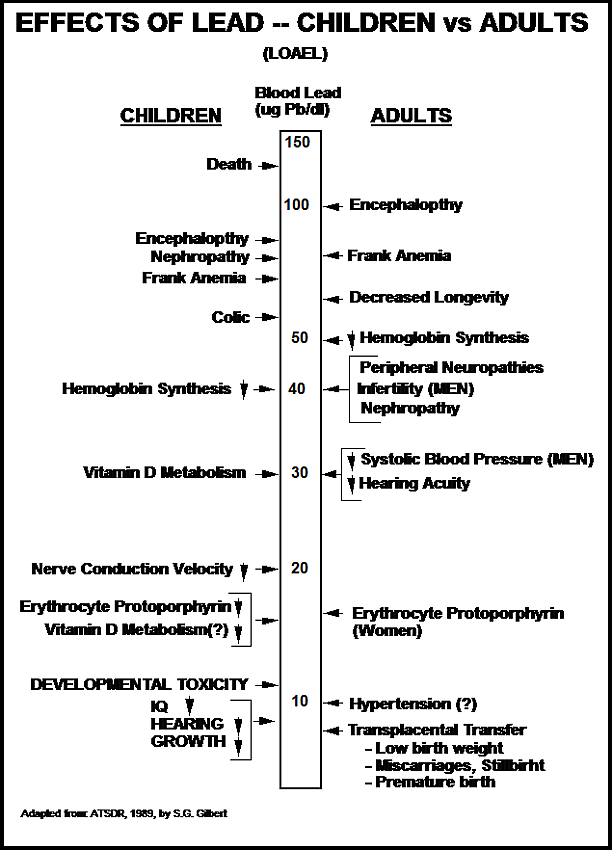 Lead Storage in the Body

Lead in blood can take the place of calcium in mineralizing tissues—bones and teeth—and be stored for years or decades until the tissue is demineralized, releasing lead back into the blood. Lead can be mobilized during these periods:13

Lead can be stored in a girl's or woman's body and passed to a developing fetus and infant many years later. A 1991 study found a higher proportion of learning disabilities among school-aged children whose mothers were poisoned by lead as children.14

Lead can be introduced to the body from inhaling dust particles or by ingesting lead on food, from mouthing objects such as toys, or by licking or sucking contaminated fingers. The most common sources of exposure include leaded paint, contaminated water and contaminated soil, but other sources are also a concern.

Dust in homes with leaded paint or that accumulates on vinyl objects can become contaminated with lead.

Lead in water generally leaches from plumbing fixtures. The tragic story of water contamination in Flint, Michigan, brought awareness of lead in water pipes to the world's attention in 2015. Unfortunately, Flint's situation was not unique, for lead in pipes is a widespread problem.

Lead in soil typically comes from deteriorating paint or nearby industrial or commercial activity, such as a gas station, firing range or smelter. Although lead has been phased out of gasoline in the US, soil in past heavy traffic areas can still be contaminated from exhaust. Lead in gasoline is still used in many countries and continues to pollute both air and soil. Lead in soil can be a problem for gardeners and their families. See the Food and Agriculture Environment page for more information.

Some foods, such as cereals and some vegetables, grown in lead-contaminated soil can contain high levels of lead, as can food cooked or served on lead-glazed ceramic or pottery dinnerware. Spices may be contaminated with lead, as can some candies manufactured in Mexico. Some candy wrappers on imported candy may also contain lead.18

Common items that can contain lead include painted toys, keys, toy jewelry such as charm bracelets and necklaces, and vinyl objects such as toys, bibs, purses, lunch boxes, shower curtains and mini blinds. Candles with lead in wicks emit lead into the air when burned. Lead in wicks was banned in the US in 2003, but older candles and candles outside the US may have lead wicks.19

Some cosmetics, including some lipsticks, have discernable amounts of lead.20 Kajal (kohl) used as a cosmetic primarily by Indian families contains high levels of lead; prolonged application may cause excessive lead storage in the body.21 Sindoor, a red powder used on the scalp by married Hindi women, may also be contaminated with lead.22

Hobbies that involve lead-based materials can be sources of exposure:

Some ethnic health remedies such as Azarcon or Greta—used by East Indian, Indian, Middle Eastern, West Asian and Hispanic cultures—contain high levels of lead.23 Any use of these remedies can increase lead exposure.

Tobacco, its smoke and its ash contain lead. Both active and passive (secondhand) smoking can be sources of lead exposure.24

Artificial turf playing fields, especially those made of nylon or nylon/polyethylene blend fibers, may contain potentially unhealthy levels of lead dust.25 The crumb rubber infill used with artificial turf is generally made from used vehicle tires, which can contain lead and other metals. Assessments of whether the crumb rubber is potentially harmful are ongoing. See our Built Environment webpage for more information.

The blood lead levels of children in the US have decreased substantially since lead was removed from gasoline and paint in the late 20th century.

graph from the CDC’s national surveillance system;26 click to zoom

While exposures to lead have decreased significantly in the US, Black children are still substantially more likely than White children to have elevated blood lead levels—almost three times as likely to have the highest levels.27 See more about vulnerable populations below.

Because lead is especially damaging to the developing brain and nervous system, the fetus and child are more sensitive to lead exposures than adults. There is no safe level of lead exposure for a fetus or child. Lead impairs nerve cell growth and division, leading to permanent neurological damage.

Children exhibit special behaviors and characteristics that can increase their risk of lead exposure:

Children are more sensitive to lead's impacts, with health effects at lower blood lead levels than adults. A developing fetus can be greatly affected from exposures too low to cause health issues for the mother.30 Further, undernourished children are more susceptible to lead because their bodies absorb more lead if calcium or other nutrients are lacking.31

To prevent adverse health effects from lead, avoid exposure to sources of lead:35

Boiling water does not remove lead hazards and may even increase the concentration of lead in the water. However, a variety of methods are available for reducing lead in tap water:36

These devices come in a variety of designs, prices and operating costs. Care should be taken that a filter is effective at removing lead before purchase, for not all filters are designed to remove lead.

Women who may have experienced lead exposures at any time in their lives should take extra care when pregnant or lactating (breastfeeding) to follow the recommendations for dietary calcium intake. A lack of calcium in a mother's body may accelerate demineralization of her bones and teeth to supply calcium to her fetus or to her milk. If she has lead stored in her bones, demineralizations will mobilize lead into her blood. See our Reproductive Health Research and Resources webpage for more information about dietary guidelines during pregnancy.

Lead has been known as a neurotoxicant for almost as long as humans have been using it. In 1922, the League of Nations banned white-lead interior paint based on evidence of harm to children. Although several European countries adopted the ban, the US declined to do so.37 Children and their families in the US will continue to struggle with the legacy of both decisions for decades. A brief history of lead regulation is listed in the Dig Deeper resources in the right sidebar.

The United States has many various regulatory standards for lead, created through several agencies. Limits on lead levels have been set in drinking water, in paint, in plumbing and in occupational settings. Some states have implemented laws, often stricter than those of the federal government.

As evidence of lead's harm has continued to accrue, the blood lead level in children deemed acceptable by various regulatory agencies has fallen. Scientists now concur that there is no safe level of exposure to lead—any lead exposure is harmful to children.

data from Gilbert & Weiss43 and CDC;44 click to zoom

See more about lead and health in the list of CHE publications and Dig Deeper resources in the right sidebar.

This page was last revised by student intern Eva Bauer and Nancy Hepp in January 2017. Information sourced from Toxipedia is noted with its icon.