This webinar featured two scientists who research the endocrine-disrupting effects of microplastics. Imari Walker, PhD, at Duke University’s Pratt School of Engineering, discussed her research on how EDCs are released from plastic debris into seabird and fish gastric fluid, and the estrogenic effects of these chemicals. She uses various tools including non-targeted analysis, suspect screening, and in vivo assays to quantify and predict the risk of these chemicals and determine causal contaminants promoting the estrogenic effects. The title of her talk is, “Characterization of endocrine disrupting chemicals released into simulated gastric fluid utilizing non-targeted analysis coupled with in vitro bioassays.”

Hanna Dusza, a PhD candidate and environmental toxicologist at the Department of Population Health Sciences at Utrecht University in the Netherlands, researches how plastic particles are taken up by placental cells, where they may exert subtle effects on endocrine function. The placenta is an important and complex endocrine organ that plays an essential role during pregnancy, regulating the exchange of nutrients, gases and waste products between the mother and the fetus. It also produces hormones crucial for the maintenance of pregnancy. Recent studies have shown that microplastics, now ubiquitous environmental pollutants, are detected in the placenta, though their potential effects are unclear. Her current research efforts focus on understanding the long-term effects of micro and nano plastics on the placenta and ultimately maternal and fetal health. 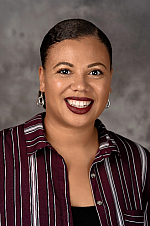 Imari Walker is a doctoral student at Duke University investigating the release, transformation and effects of polymer associated chemicals within aquatic environments. Her dissertation work focuses on endocrine disrupting chemicals like BPA that are of concern to human health and the environment. Before Duke, Imari completed her Bachelors in Marine Science at the University of California, Berkeley. Alongside her PhD work, Imari uses her science communication-based YouTube channel to share information about plastic pollution, microplastics, and chemicals associated with these consumer products.

Hanna Dusza is an environmental toxicologist with a long-standing passion for environmental sciences. She received her MSc degree in Environmental Biology from the University of Gdansk, Poland, and a second MSc degree in Environmental Chemistry and Toxicology from Vrije Universiteit Amsterdam, Netherlands. Currently, Hanna is working as a researcher at the Department of Population Health Sciences at Utrecht University, NL. Her interests over the years gravitated towards understanding the effects of environmental pollutants on pregnancy and early life health. During her PhD work, Hanna conducted research on early life exposure to plastic-associated compounds (phthalates and bisphenols) and developed a novel method for the effect-directed analysis of endocrine-disrupting compounds in human amniotic fluid. Her current research efforts focus on micro- and nanoplastics exposure during pregnancy and the consequences of such exposure for fetal and maternal health. In the context of this research, Hanna looks closely at the human placenta, a temporary organ most vital for healthy pregnancy outcomes, but also the least understood. Specifically, she investigates the placental uptake and transport of microplastics and their effects on placental functioning. She is a member of large national and international research collaboratives on the human health impacts of micro- and nanoplastics, such as the AURORA (Horizon 2020, EU) and the MOMENTUM (ZonMW, the Netherlands) project.

This webinar is part of the Young EDC Scientists Showcase (YESS) webinar series. The YESS webinar series is sponsored by the Healthy Environment and Endocrine Disruptor Strategies (HEEDS) Mentoring Working Group and coordinated by the Collaborative on Health and the Environment (CHE). This series features speakers in the early stages of their careers, such as PhD students, post-docs, and other early-career researchers who study endocrine disrupting chemicals (EDCs). They will present their research projects and findings on webinars with 2 speakers and time for questions. Presentations will be recorded and available online.

This webinar was moderated by Sarah Howard, MS, Founder and Manager, DiabetesandEnvironment.org. It lasted for 60 minutes and was recorded for our call and webinar archive. If you are interested in presenting on one of these webinars, or have a recommendation for a speaker, please contact HEEDS.