13th in a series of calls organized by CHE and the Boston University Superfund Research Program (BU SRP). 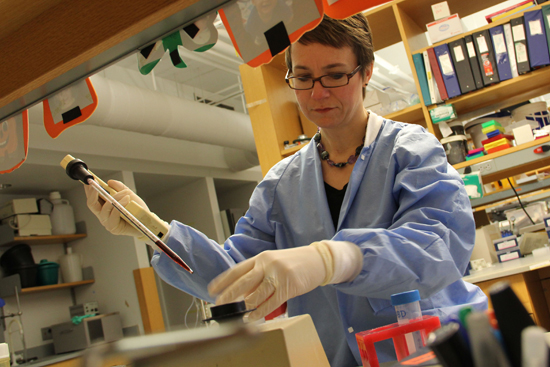 We should not wait to think about our bone health until we are older. Maximizing peak bone mass in young women is essential in minimizing the risk in later life for osteoporosis, a condition in which the bones become brittle and fragile from loss of tissue and which is diagnosed by a loss of bone density. There are multiple critical points in a woman’s lifetime that will determine her risk for osteoporosis. Osteoporotic bones are more likely to break in a fall. The two factors that are most important to risk of developing osteoporosis are failure to reach maximum bone density in early adulthood and the loss of estrogen that occurs normally at menopause. An underappreciated aspect of loss of bone health is the contribution of chemical exposures. It has been recognized for some time that consumption of alcohol impairs bone health. New research in animal models demonstrates that endocrine disrupting chemicals (EDCs, or chemicals that interfere with the production, removal and action of hormones), also may impair a woman’s ability to achieve and maintain her ideal bone density long before menopause. A newly recognized type of EDC, the environmental obesogen, may be to blame. Human exposure to EDCs such as phthalates, flame retardants, and organotins may be compromising the carefully orchestrated processes that keep bone healthy by triggering fat cells to be made rather than bone cells.

On this call, we explored the nature of bones as dynamic organs, how they are built and repaired, how bone-disrupting chemicals are challenging our ability to continue building healthy bone, and how nutrition can play a both positive and negative roles role in bone health.

Cliff J. Rosen, MD, is the Director of Clinical and Translational Research and a Senior Scientist at Maine Medical Center’s Research Institute. He is a Professor of Medicine at Tufts University School of Medicine. He was the first Editor-in-Chief of the Journal of Clinical Densitometry, is the current Editor-in-Chief of The Primer in Metabolic Bone Diseases, and is the Associate Editor for New England Journal of Medicine. His publications include more than 391 peer-reviewed manuscripts, covering both clinical and basic bone biology.

Dr. Rosen has overseen numerous phase II and III clinical trials, funded both privately and through the NIH. He is a member of the FDA Advisory Panel on Endocrinologic and Metabolic Drugs and a former chairperson of that committee. He also has served on two Institute of Medicine Committees, and was Chair of the NIH Review Panel for Skeletal Biology and Bone Diseases for 2002-2004. He is the current Chair of the Clinical Trials Review Panel for NIAMS. He was a previous member of the NIAMS Scientific Advisory Board and served as president of the American Society for Bone and Mineral Research in 2002-2003. Dr. Rosen’s research interests include the genetic regulation of IGF-I, skeletal metabolism and stem cell fate, PTH as an anabolic therapy, and the relationship between marrow adipogenesis and osteoblastogenesis.

Jennifer Schlezinger, PhD, Associate Professor, Environmental Health, Boston University School of Public Health is a molecular toxicologist. Dr. Schlezinger is an active member of the Society of Toxicology and a Project Leader in the Boston University Superfund Research Program. The overarching goal of her laboratory’s research is to determine how exposure to environmental chemicals impair bone and fat tissue homeostasis and how these toxicants may lay the foundation for osteoporosis and metabolic disease. Dr. Schlezinger’s group identified a novel class of chemicals, organophosphate flame retardants used in furniture foam, that adversely affect bone cell formation. Using human bone marrow cells in culture and animal models, the signaling mechanisms that maintain healthy bone and that are targeted by pollutants are being identified. Importantly, we are not exposed to just one of these pollutants at a time. Thus, the Schlezinger laboratory investigates how exposure to multiple pollutants at low concentrations act together to enhance the negative effects on bone health.

Martin J. Ronis, PhD, joined the faculty of Louisiana State University Health Sciences Center – New Orleans in 2015 as a Professor in the Department of Pharmacology & Experimental Therapeutics. Dr. Ronis is a biochemical and endocrine toxicologist who conducts research in the areas of alcohol pathology in liver and bone and on the impact of environmental pollutants such as lead and pesticides. He also works on health effects of dietary factors found in fruits, vegetables, and grains. His research has been funded by the National Institutes of Health since 1990. He sits on several NIH Study Sections and is active in many professional societies including the Society of Toxicology (SOT), the Endocrine Society and the Research Society on Alcoholism (RSA). Dr. Ronis was President of the South Central Chapter of the Society of Toxicology 2007-2008 and 2015-2016. Dr. Rosin received his Ph.D. in Physiology & Biochemistry from Reading University, England, U.K. in 1985. After post-doctoral fellowships at North Carolina State University and at the Karolinska Institute in Stockholm Sweden, Dr. Ronis joined the faculty of the University of Arkansas for Medical Sciences in Little Rock in 1989. He remained at UAMS until 2014 rising to the rank of Professor of Pediatrics, Pharmacology & Toxicology in 2002 and as Associate Director for Basic Research of the Arkansas Children’s Nutrition Center.

This call was moderated by Dr. Wendy Heiger-Bernays. It lasted for 1 hour and was recorded for our call archive.