Mercury in the North: Sources of Contamination and International Policies to Protect Health and Human Rights

Mercury is an extremely toxic metal that is naturally occurring and can damage the human nervous system. Mercury is released into the atmosphere, soil and water from a variety of sources and also has broad uses in everyday objects. The Minamata Convention on Mercury is a global treaty to protect human health and the environment from the adverse effects of mercury. 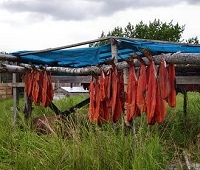 On this call, speakers discussed recent Mercury Convention negotiations and the importance of this treaty to the health and human rights of Indigenous communities. On this call Rochelle Diver with the International Indian Treaty Council and Kendra Zamzow with the Center for Science in Public Participation discussed the sources of mercury contamination in the Arctic and Alaska, how the proposed Donlin Gold Mine would release significant amounts of mercury if developed, the potential risks this poses to the health of Kuskokwim watershed fisheries and those who depend on them, and how those risks could be reduced.

Rochelle Diver is the Environmental Health Program Coordinator for the International Indian Treaty Council. She received her Master Degree in Human Rights from the University of Sydney in 2012.

Kendra Zamzow, PhD, is an environmental geochemist and the Alaska representative for the Center for Science in Public Participation. She has years of experience as a fisheries biologist with the Alaska Department of Fish and Game, the Forest Service, and the National Marine Fisheries Service. She received her PhD in Environmental Chemistry from the University of Nevada.

This call was hosted by the CHE-Alaska working group and was recorded for the call archive.