Looking Toward Green Chemistry: A Conversation with a Pioneer in the Field, Dr. Terrence Collins

GLGCN/MGCC Green Chemistry Webinar with Professor Terry Collins: Building the chemical dimension of a sustainable civilization: the Compass and the Code

This call is part of a periodic series CHE is hosting with “luminaries” in environmental health.

Dr. Terrence (Terry) Collins, one of the leading educators and researchers in the field of green chemistry, is the Teresa Heinz Professor of Green Chemistry and Director of the Institute for Green Science at Carnegie Mellon University. Dr. Collins’ distinguished scientific contributions to the field over more than twenty years, as well as his dedication to green chemistry education, have made him a highly regarded and respected researcher worldwide. 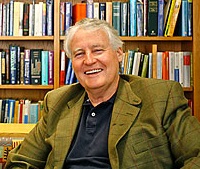 Dr. Collins has been particularly lauded for his invention of a new class of oxidation catalysts with demonstrated potential including early commercial success for enormous, positive impacts on the environment. Dr. Collins designed and developed "TAML Activators", the first full-functional mimics of any of the great families of oxidizing enzymes, solving in the process one of the all-time great challenges of reaction chemistry and catalysis. Of particular relevance to sustainability, TAML activators with peroxide can rapidly destroy numerous persistent, toxic pollutants in water, including estrogens and many other endocrine disruptors, active pharmaceutical ingredients, chlorinated and phenols, nitroaromatic explosives, pesticides, chemical warfare agents, and dyes as well as hardy pathogens. Not only that, but these activators do so with superb technical, environmental and cost performances. These discoveries are underpinning new technologies for treating municipal wastewaters and the effluents of diverse industries. TAML systems also enable new products as commonplace as advanced laundry detergents.

Among Dr. Collins’ numerous honors are the 2010 Heinz Award for the Environment, the inaugural Charles E. Kaufman Award of the Pittsburgh Foundation, the 2007 Award of The New York Metropolitan Catalysis Society, the Environmental Protection Agency’s 1999 Presidential Green Chemistry Challenge Award, the Pittsburgh Award from the American Chemical Society and Japan’s Society of Pure and Applied Coordination Chemistry Award, and many others. Collins is an honorary professor and a Distinguished Alumni Award recipient of the University of Auckland, New Zealand, a Fellow of the Royal Society of New Zealand (Hon), the American Chemical Society and the Alfred P. Sloan Foundation and he has been a Dreyfus Teacher-Scholar.

Elise Miller, MEd, CHE’s director, talked with Dr. Collins about how he came to the field of green chemistry, his work over the past decades, what he saw as pivotal moments in the evolution of the field, and his views on green chemistry’s particular role in protecting the public from exposures to toxic chemicals in the future.

The call  was recorded for our call archive.