The Rise of the US Environmental Health Movement: A Conversation with Kate Davies

The Rise of the US Environmental Health Movement 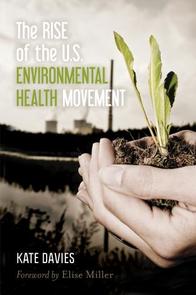 The Rise of the US Environmental Health Movement by Kate Davies is the first book to offer a comprehensive examination of the environmental health movement, which unlike many parts of the environmental movement, focuses on ways toxic chemicals and other hazardous agents in the environment affect human health and well-being. Born in 1978 when Lois Gibbs organized her neighbors to protest the health effects of a toxic waste dump in Love Canal, New York, the movement has spread across the United States and throughout the world. By placing human health at the center of its environmental argument, this movement has achieved many victories in community mobilization and legislative reform. On this call Kate Davies and Elise Miller, CHE’s director and author of the book's forward, discussed the environmental health movement’s historical, ideological, and cultural roots as well as talked about its strategies and successes.

Kate Davies, DPhil, has been active on environmental health issues for 35 years in the United States and Canada. She has worked with numerous nongovernmental and governmental organizations including Greenpeace, the Collaborative on Health and the Environment, the Institute for Children’s Environmental Health, the International Joint Commission and the Royal Society of Canada. She is currently core faculty at Antioch University Seattle’s Center for Creative Change and Clinical Associate Professor in the School of Public Health at the University of Washington.

The call was moderated by Elise Miller, MEd, CHE director.