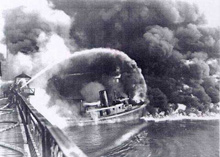 Oil spills and oil fires are nothing new. On June 22, 1969, an oil slick caught fire on the Cuyahoga River just southeast of downtown Cleveland, Ohio. The image that the "the river caught fire" motivated change to protect the environment. However, this was in fact the thirteenth recorded time that the river had caught fire since 1868.

The 1969 Cuyahoga River fire catalyzed water pollution control activities, resulting in the creation of the federal Environmental Protection Agency (1970) and the Ohio Environmental Protection Agency (OEPA), and passage of the Clean Water Act (1972) and the Great Lakes Water Quality Agreement (1972). As a result, large-point sources of pollution on the Cuyahoga have received significant attention from the OEPA. This river fire also influenced the arts: it is referred to in Randy Newman's 1972 song "Burn On," R.E.M.'s 1986 song "Cuyahoga," the Simpsons episode "Lemon of Troy," and Adam Again's 1992 song "River on Fire."

We learned from the Cuyahoga River Fire and are relearning again from the oil eruption in the Gulf of Mexico that we must invest in pollution prevention to protect human and ecological health. We also still struggle with controlling vast non-point sources of water pollution such as pesticide run-off and agricultural waste. Focusing on short-term gain creates profits for corporations while externalizing the true costs of pollution to the public and environment.