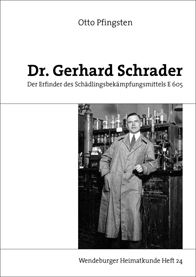 Dr. Gerhard Schrader (February 25, 1903 - April 10, 1990) was a German chemist who specialized in the discovery of new insecticides. He hoped to make progress in the fight against world hunger but is best known for his accidental discovery of nerve agents and is sometimes called “the father of the nerve agents."

On December 23, 1936, Dr. Schrader synthesized Tabun (ethyl dimethylphosphoramidocyanidate, GA) at the I. G. Farbenindustrie laboratory in Leverkusen. He also discovered Sarin, Soman, and Cyclosarin, which are all organophosphate compounds. These highly toxic gases, especially Tabun, were stockpiled by the Nazis during World War II but not used against the Allies. After the war, British intelligence tried to recruit Schrader to develop chemical weapons in the UK, but Schrader remained in Germany and worked for Bayer. In declining the offer, Schrader wrote: "I am glad to be fully engaged again in the field of plant protection. My work during the war in the field of toxic substances never complied with my wishes.” He also wrote, "I should like to assist in improving nutrition, but not in inflicting new wounds." 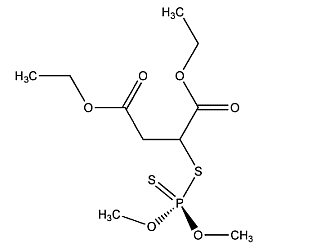 Approximately 70% of pesticides used in the United States are organophosphates, mostly in agriculture. While less-toxic pesticides are available, they are not without their risks. Integrated pest management (IPM) is an approach to pest management that can significantly reduce pesticide use. Employed in agriculture, landscape maintenance, and structural pest control, it emphasizes prevention and monitoring of pest problems and considers pesticide applications only when non-chemical controls are ineffective or impractical.