A scene from CHE's 2012 conference in New York

Over the years CHE has organized a number of major conferences to bring the emerging environmental health science to a wide range of audiences. The goal has been to leverage strategic initiatives to help reduce environmental contributors to diseases and disabilities. All of our meetings, including our inaugural conference in 2002, have featured leading researchers who study the links between environmental exposures and various health endpoints. Some events have focused on educating specific audiences, like those in the learning and developmental disabilities sector or health professionals. Others have been solely for scientists to develop consensus statements about links between toxic exposures and particular health concerns, such as infertility and Parkinson's disease. In addition, we've tailored certain meetings for those interested primarily in children's health and others that include discussions of multiple, interacting environmental factors that can impact health across the lifespan. We have also offered trainings for smaller groups targeting an integral concern, such as environmental justice. Below you will find a list and description of some of our featured meetings.

Past Conferences and Meetings

CHE's Environmental Health Primary Prevention trainings provided evidence-based science in lay language to be used in a range of settings, including advocacy, determining research priorities, public education and community organizing. Trainees were provided a deeper understanding of the science that links health outcomes with environmental factors, so trainees could better effectively champion for a healthier world. Trainings were offered on the subjects of environmental links to breast cancer, reproductive health, healthy aging, and ecological health across the lifespan.

The "Healthy Environments Across Generations" conference gathered over a hundred and fifty participants at the New York Academy of Medicine (NYAM) to focus on the impacts that multiple, interacting environments can have on health, as well as intergenerational and creative approaches to improve public and planetary health. CHE partnered with NYAM, AARP, the US Environmental Protection Agency, The Intergenerational School, WE ACT for Environmental Justice, The Whole Child Center, and Gray is Green, along with more than 60 co-sponsors, to put on this event.

The conference was planned as a 'unconference' from the beginning. The absence of PowerPoint, the presence of conversational formats, the integration of the arts and music, the amplification of our collective experience through social media, sketches and videography, the lack of disciplinary boundaries, and the openness to creative thinking made this conference more than an event, but part of a mental shift toward collective, positive action based on hope, rather than fear.

During this series of three workshops, national experts from diverse sectors highlighted the latest research on associations between environmental exposures and early neurodevelopment as well as the implications for prevention-based public health policy. The workshops were intended to catalyze cross-discipline discussions among leaders in environmental, experimental, and epidemiologic fields, as well as those involved in public policy and environmental health advocacy. 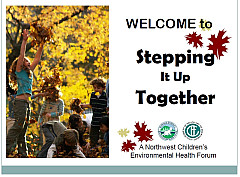 Northwest Children's Environmental Health Forum: Stepping It Up Together

This year's theme, "Stepping It Up Together" was designed to encourage and increase new opportunities for cross collaboration and to engage with partners who share the mission of protecting children's health. A panel of children's health leaders answered questions and modeled suggestions on how we can Step Up to meet today's challenges. Group sessions provided time to align critical priorities, with take-away action steps, to further define how working together will advance the accomplishment of mutual goals.

This groundbreaking one-day symposium highlighted a range of interacting factors that influence child health and development, including nutrition, education, socioeconomic status, exposures to toxic chemicals, and access to preventive health care. Leaders in these fields described model programs and concrete steps toward creating optimal and sustainable environments in which children can thrive and reach their full potential. The symposium was co-hosted by CHE, The Whole Child Center, and the University of California San Francisco Osher Center for Integrative Medicine.

This training brought together participants from the field of learning and developmental disabilities with experts from Wellstone Action to explore how to leverage environmental health science and messaging, particularly as it relates to learning and developmental disabilities, to impact significant policy change. Following the training, many participants continued on to Washington, DC, to meet with legislators. This training was sponsored by The John Merck Fund.

Spokane River Toxics and Human Health: A Workshop on Toxics in the River and Their Implications for Human Health

Scientists shared what is known about toxics detected in river sediments (PCBs, PBDEs, heavy metals, etc.) and explored what this might mean about risks to human health. 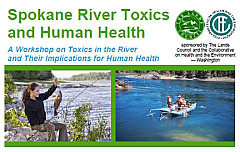 Health advocates and local leaders discussed how to protect the river as well as how to safely recreate on the river and use its resources. The workshop sought to find answers to these questions: How can we become better stewards of the Spokane River and help clean it up?  What are other communities in Washington doing to restore and "take back" their rivers? The meeting was sponsored by The Lands Council and CHE.

This meeting hosted a multidisciplinary group of experts  to assess what is known about the contribution of environmental factors to Parkinson's Disease. Participants included toxicologists, epidemiologists, geneticists, neuroscientists, and medical practitioners. They were joined by representatives of PD advocacy groups and people with PD to review the state of environmental health science as it pertains to PD. The purposes of the meeting were to review findings from diverse research disciplines concerning environmental factors that alone or in combination with genetic variables provide a biologic basis; to identify conclusions that could be drawn with confidence from existing data; to identify plausible but uncertain conclusions; and to identify research gaps and needs and to describe features of a coherent research agenda. The meeting was co-hosted by CHE and the Parkinson's Action Network (now a part of the The Michael J. Fox Foundation for Parkinson's Research).

UCSF-CHE Summit on Environmental Challenges to Reproductive Health and Fertility

Over 400 leading scientists, physicians, nurses, patient, and community group representatives, government agency officials, and others came together for three intensive days at the highly successful 2007 University of California at San Francisco (UCSF) - CHE Summit on Environmental Challenges to Reproductive Health and Fertility. Colleagues gathered at the UCSF Mission Bay Conference Center to exchange the latest research around environmental contaminants and reproductive health, discuss how the science impacts public health, education, policy, and the health care system and explore mutual areas of collaboration among the diverse constituencies participating in the Summit. The Summit was co-hosted by the University of California San Francisco Department of Obsterics, Gynecology, and Reproducive Sciences and CHE.

CHE-LDDI Regional Meeting: Environmental Toxins: What Are the Links to Learning and Developmental Disabilities?

LDDI's third regional meeting brought together almost 80 people, some of whom were new to the field of environmental health. The meeting provided an overview of the current science linking environmental pollutants and learning and developmental disabilities and then focused on specific areas of scientific research on neurotoxicants.

Approximately 40 people attended this half-day workshop, including researchers, health professionals, learning and developmental groups, public health representatives, environmental health and justice advocates and other concerned citizens. Ted Schettler, MD, MPH; Herbert Needleman, MD; and Laura Hewitson, PhD, provided science overviews and updates on neurotoxicants, followed by a panel of national, state and local nonprofits, represented by Kathy Lawson, Myron Arnowitt and Amy Stiffey, MA, who is working to protect communities from neurotoxicants through education and policy efforts. The meeting was sponsored by The Heinz Endowments, The John Merck Fund, and the University of Pittsburgh Cancer Institute. It was co-organized by the Learning Disabilities Association’s Healthy Children Project and CHE.

CHE's Fertility and Reproductive Health Working Group partnered with CHE Partner Linda C. Giudice, MD, PhD, and Stanford University School of Medicine’s Women’s Health at Stanford Program to convene this small multidisciplinary group of experts to assess what the science told us about the contribution of environmental contaminants, specifically synthetic compounds and heavy metals, to human infertility and associated health conditions. This workshop was the first time researchers in reproductive epidemiology, biology, toxicology and clinical medicine gathered with representatives of relevant professional societies as well as infertility support, women’s health and reproductive advocacy organizations from the United States to review the state of environmental health science as it pertains to human infertility.

This was the first LDDI Regional Meeting. The purpose of this meeting was to foster effective collaboration between researchers, health care professionals, health-affected groups, environmental health and justice advocates, and other concerned citizens in order protect all children in the region from environmental pollutants that can undermine their healthy development. This meeting was organized by the Learning Disabilities Association of Michigan (a LDA Healthy Children Project Partner), Ecology Center, and CHE. It was co-sponsored by the Association for Children’s Mental Health, Michigan Environmental Council, Michigan Council for Maternal and Child Health, Michigan Chapter of the American Academy of Pediatrics, Bridges 4 Kids, and Michigan Lead Safe Partnership.

CHE-LDDI National Meeting at the National Institutes of Health

This was the first major national meeting of CHE-LDDI. This meeting welcomed over 80 researchers, health care professionals, government agency representatives, philanthropists, learning and developmental disabilities advocates, and environmental health and justice leaders. The overarching goals of the meeting:

The meeting was sponsored by The John Merck Fund and the National Institute of Environmental Health Sciences.

LDDI worked with the American Association on Intellectual and Developmental Disabilities (formerly the American Association on Mental Retardation) to organize a national meeting of learning and developmental disabilities (DD) groups and environmental health organizations at the Wingspread Conference Center to draft a national blueprint for working to eliminate environmental toxicants that may contribute to DDs.

This second strategic planning meeting of CHE-LDDi stakeholders also included presentations on the science of neurotoxicants and brain development and an overview of the upcoming conference at the Wingspread Conference Center in July 2003, entitled Collaborating for Action: A National Invitational Summit to Reduce the Unnecessary Occurrence of Mental Retardation Caused by Environmental Pollutants and Toxins.

Initial meeting which led to the formation of CHE

The Collaborative on Health and the Environment was initiated at a meeting of the San Francisco Medical Society, and co-sponsored with Commonweal, a health and environmental research institute in Bolinas, California. A two-day conference in Bolinas followed the San Francisco meeting, where a smaller group of committed individuals came together to determine the overall structure of the network.