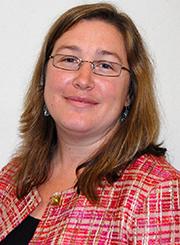 Laura Vandenberg, PhD, is trained as a developmental biologist, but became interested in environmental health as she started to focus on the times when biology had imperfections. Instead of looking at how stem cells differentiate into skin, or muscle, or tissue, she was interested in “what happens when those processes go wrong,” Dr. Vandenberg shares.

“Museums are full of these things, creatures with two heads or two tails or other weird things. And, often times those malformed creatures are generated because of something that happened in the environment. As a very young scientist, I became fascinated with how environmental factors, and that’s very broadly defined, like food and stress, not just this chemical world that I study, can affect so many different parts of development,” Dr. Vandenberg explains.

While working on her PhD with Dr. Ana Soto at Tufts Medical School, she was studying BPA and how it and other estrogenic chemicals influence risk of mammary cancer in rodents.

“For me, the natural progression after spending a lot of effort studying BPA was to shift towards studying some of these chemicals that are being used to replace it,” Dr. Vandenberg shares.

When similar chemicals are used to replace ones that have been shown to cause harm, they are often referred to as regrettable replacements. When it comes to BPA (which is typically used in plastic such as water bottles and reusable food containers, thermal paper like that used for receipts, and in the lining of metal cans for food), these regrettable replacements are other chemicals (a common one being BPS) that have similar chemical properties that allow it to have some of the same uses as BPA without having the exact same chemical shape. While they are technically different, they still act the same in the body, which is often why they are deemed regrettable. They just aren’t different enough.

“BPA, and now we are learning BPS and some of the other Bisphenol replacement chemicals, have a chemical structure that allows them to mimic the action of estrogen. Estrogen is made naturally in our body; it’s not something that we often think of as scary to us, but estrogen has good properties and bad properties. And our bodies, with the estrogen it makes naturally, they control when we are making estrogen and when tissues in our bodies are responding to it. When we start throwing into this very intricately controlled biological system other chemicals that act like estrogen, then we start to muck with those systems, and we can see health effects.” Dr. Vandenberg explains.

BPA leaves human bodies quickly. This is a good thing, but because it is used in so many different products we use every day, it is hard to completely remove it from our lives.

Because of the ability for BPA and it’s regrettable replacements to leave bodies quickly, it is easy to think they aren’t as dangerous or harmful as other toxins, like lead or mercury for example.

“In general we don’t think of these chemicals as having permanent effects on adults because they will have an effect when in your body, but, if you stopped being exposed, we typically think that adults will recover. That’s not true if you are a fetus, an infant, or a neonate. The reason is that these chemicals can actually change the decisions that cells make. If you are a stem cell, and you are deciding should I make myself turn into bone or should I make myself turn into fat, if a chemical affects that decision, the cell can’t go back and say, ‘Oh, I decided to become fat, but I really should have been bone, so I am going to undo that.’ What’s really the problem is that if you are exposed during, we call them critical windows - or sensitive or vulnerable windows - there is no going back. Those decisions, made by cells and tissues and influenced by hormones, are irreversible,” Dr. Vandenberg says.

With all of this understanding about the ubiquity of BPA and other endocrine disrupting chemicals, the question becomes what can be done. How can consumers protect themselves? Besides making healthier choices, like choosing fresh vegetables when possible and opting for chemical free household cleaners like white vinegar, baking soda and lemons, the next step is to use your consumer power to ask for change.

“I see it as my job not just to research these chemicals and try to understand what they do, but also to educate decision makers about why what they are doing right now isn’t working. Why is it that people are exposed to chemicals at levels that are associated with harm in human studies? What’s going wrong when we are testing these chemicals? Or, are we not testing these chemicals enough or at all? Rather than encouraging people to sort of have a fit of fright about their chemical exposures, or do the opposite and think ‘oh well, I am exposed to so many things who cares,’ I hope to instead empower them to make better choices when they can. I also think the average consumer should pass the buck to the decision makers and push them to try to make better decisions about chemical safety. Those are the people whose job it is to protect us, and we should be asking them to do their job,” Dr. Vandenberg suggests.

When it comes to BPA, consumers had a big impact by using their purchasing power to make changes. But, the changes they called for were not enough. The field of environmental health made it clear BPA was bad, but could have focused more on educating about why BPA isn’t safe. If consumers knew what to ask for, they could call for products free of BPA and any of its regrettable replacements.

When it comes to finding better solutions, Dr. Vandenberg is a proponent of celebrating them when we have them. BPA isn’t one of those times yet. When solutions do not yet exist, Dr. Vandenberg stresses that it should be a joint effort from many fields to find the best solutions.

Moving forward, it is important to continue studying the effects of different chemicals on humans, but it is just as important to bring everyone together to understand the impacts of these products and how we can make better choices and provide safer, healthier options to everyone.

This month, we held our second webinar in the series. In addition to these presentations, we got to sit down and learn a little bit more about the researchers. While we did talk about their research, we also learned how they first got interested in the field and what this work means to them, plus a few tips for staying healthy.