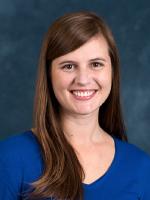 Kelly Ferguson, PhD, MPH, is an NIH researcher whose focus is looking at how different exposures impact birth outcomes. Her interest in environmental health comes from the fact that it’s something that everyone deals with.

Her work is also looking at oxidative stress, most specifically as it relates environmental exposures in women and preterm birth.

She is monitoring those levels of lipid, DNA, and protein damage as measures of oxidative stress during pregnancy to see how they might be important in the relationship between environmental chemical exposures and the baby’s health and different birth scenarios.

“We hypothesize that having higher levels of exposure to both phthalates and psychological stress during pregnancy would result in higher oxidative stress levels and consequently an increased risk of delivering early,” Dr. Ferguson shares.

And, she is finding associations in some of her work.

“What we saw in pregnancy was that higher levels of this oxidative stress biomarkers were associated with an increased risk of preterm birth. There is also some evidence that higher levels can increase your risk of having preeclampsia, which is a hypertensive disorder of pregnancy. I think for preeclampsia, it is a little bit hard to tell whether oxidative stress was the cause or the consequence of having preeclampsia, but those have been associated as well,” Dr. Ferguson says.

While Dr. Ferguson and other researchers have found these connections, she also points out that these are most helpful on a community level.

“On an individual level it is not really meaningful to know your concentration of an oxidative stress marker... [but,] I on a population level it is important, and it may be useful for us to be thinking about behavioral modifications we can make to reduce oxidative stress.” She goes on to give an example saying,

“Taking antioxidants doesn’t prevent adverse pregnancy outcomes like preterm birth. But, if we know that you are in an area where you have higher levels of exposure to air pollution, and higher oxidative stress levels, it could be possible that in those areas supplementing with an antioxidant would reduce your overall oxidative stress load and help with poor pregnancy outcomes,” Dr. Ferguson says.

Overall, determining individual actions to address pregnancy outcomes is difficult, but studying them is important so that solutions can be tested down the road. While there is not a clear recommendation, Dr. Ferguson shared with us some recommendations she would make to her friends.

“I tell my friends who are pregnant … the research that we do is on a population-wide scale, and it’s not like higher levels of phthalates in you are going to cause you to have a preterm birth. It’s just kind of what we are observing overall.

“I want to be able to tell my friends who are pregnant that they can do x, y, and z to reduce their exposure, but it doesn’t really work every time… It’s really hard to predict where phthalates will show up, so it can be very difficult to reduce your exposure.

“I tell them not to worry too much. We don’t know the consequences of stressing out about these things, and they could outweigh the benefits,” Dr. Ferguson says.

Overall, the main takeaway from Dr. Ferguson is that there are many ways that our bodies respond to various environmental stressors that we encounter on a daily basis. Some of them can be counteracted by our body’s natural processes, but not always. Do what you can, but don’t be overwhelmed when you hear about research that it done on a population level.

For the future, Dr. Ferguson’s hope is simple.

“I hope that [through my work] I am able to identify environmental factors that … are important for adverse pregnancy outcomes, so that we can intervene on these exposures and prevent the poor outcomes from happening. That’s kind of my life goal, to reduce these poor pregnancy outcomes by identifying important environmental factors for prevention,” Dr. Ferguson shares.

In March, we held our seventh webinar in the series. In addition to these presentations, we got to sit down and learn a little bit more about the researchers. While we did talk about their research, we also learned how they first got interested in the field and what this work means to them, plus a few tips for staying healthy.