To mark the 20th anniversary of the Collaborative on Health and Environment (CHE), we are hosting a series of informal, online conversations with leading thinkers, researchers and innovators in the field of environmental health and justice.

The Arctic is a hemispheric sink for persistent industrial chemicals that are transported on atmospheric and oceanic currents from lower latitudes through global distillation. Arctic Indigenous Peoples have some of the highest levels of persistent pollutants of any population on earth. These problems are exacerbated by rapid climate change in the Arctic, which is warming at least four times faster than the planet as a whole. Pam and Vi will reflect on their work hosting more than 170 calls and webinars as CHE Alaska, highlighting environmental health and justice issues in the Arctic region and beyond.

Says Pam, “We see growing awareness of the Arctic as a place of vulnerability and an increasing interest in concerted action to protect the health and well-being of this region, its wildlife and peoples.”

Vi also shared the latest on the community-based research projects on Sivuqaq (traditional name for St. Lawrence Island) that ACAT has been coordinating for 22 years. ACAT, the tribes, and academic research partners have documented long-term environmental and health consequences of military and long-range industrial contamination on Sivuqaq. Their most recent published paper documents contamination of traditional foods of the Yupik people of Sivuqaq with legacy and currently used chemicals such as PBDEs and PFAS. 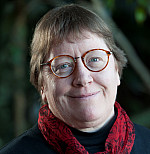 Pamela Miller founded Alaska Community Action on Toxics (ACAT) in 1997 and serves as Executive Director. Since 2016, she has served as Co-Chair of the International Pollutants Elimination Network (IPEN), a network of more than six hundred environmental health and justice organizations working in more than 120 countries. She is a Principal Investigator for community-based participatory research projects in the Arctic supported by the National Institute of Environmental Health Sciences.

Viola (“Vi”) Waghiyi is a Yupik grandmother who was born in Savoonga on Sivuqaq (traditional name for St. Lawrence Island). Vi was hired in 2002 to work in Anchorage to assist on the Sivuqaq environmental health and justice projects. She became the Project Coordinator in 2004 and Environmental Justice Community Coordinator in 2005. In 2009, she stepped into the position of Program Director to share responsibilities with the executive director for all of ACAT’s efforts. She served as a National Advisory Environmental Health Sciences Council member to the National Institute of Health and in 2021 was named to the White House Environmental Justice Advisory Council.