On June 13 we joined Brian Bienkowski, reporter and editor at Environmental Health News and the Daily Climate, for a discussion of how vulnerable communities across America bear a disproportionate burden of contamination from endocrine disrupting chemicals (EDCs). From Michigan to Alaska, Bienkowski has investigated environmental justice stories in which industrial and military pollution threatens the health and traditions of Native peoples. He has also reported on environmental health disparities among communities of color, low-income communities, and women and children, and has focused much of his reporting on investigating the scientific evidence of adverse health effects of exposure to EDCs such as bisphenol A and PFAS. 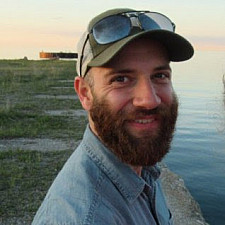 Brian Bienkowski joined Environmental Health News in 2012 and had an immediate impact, anchoring a reporting team that won an Oakes Award honorable mention for EHN.org's 2012 series, Pollution, Poverty, People of Color. He also won 2013 and 2014 awards for Outstanding Beat Reporting from the Society of Environmental Journalists, and has received awards from the Association of Health Care Journalists and The Aronson Social Justice Journalism Awards.

He holds a master's degree in environmental journalism and a bachelor's degree in marketing from Michigan State University. He lives with his fiancé, Dani, and their five (!) four-legged friends in Michigan's Upper Peninsula where he can be found playing mandolin or untangling his fly line from stream side tag alders.